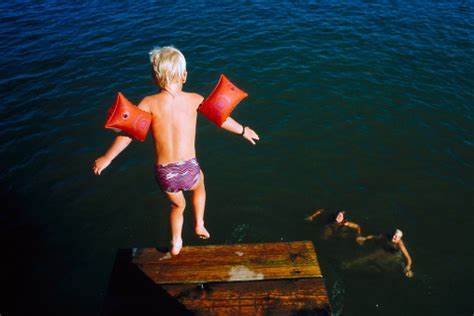 First-time recreational triathletes often make a common error: they over train in one area—usually their weakest. And for many confidence is highest on land, the run, and the ride, and disproportionate resources are expended on preparing for the swim.

The problem with shoring up one’s weakest skill, in business, in life, and in a triathlon, is that a competitor can in fact appear weak in one area, climbing out of the water dead last, for instance, and then prove to be such a powerhouse elsewhere, such as the run or the ride, that they lock down an overall win once on dry land. So don’t worry about achieving anything beyond baseline competence in your areas of weakness. Baseline competence in a triathlon swim = not drowning. In business you can outsource your baseline area(s) of weakness to experts, levelling up your entire performance. And, for me, when it comes to triathlons, when I can outsource the swim, the run, and also the ride to three unique powerhouses, that’s when I’ll enter a triathlon.

This tendency to over-allocate resources to our weakest areas often stems from one of the many things we are taught (incorrectly) from an early age; among other foolish things like “don’t judge a book by its cover,” and, “if you just practice this instrument long enough you’ll learn to love it.”

We are taught from an early age to focus on our weaknesses, and it took me a long time to realize that I do not have to master each and every little thing. These days when I find something that I’m weak at, I find a shortcut. I outsource it. In some cases the thing to outsource may well be something we are quite competent at, simply from a time/value standpoint. As we age, we tend to realize that the one thing we are going to run out of first is time, not money—money’s the easy part. As we begin to value time over money, we learn to happily (mostly) part with money and reclaim time.

Focus on strengthening your natural strengths.

Go for the gold, where you know gold can easily be had. Instead of spending extra time and money on training and coaching to improve a weak area that only represents a small portion of the overall effort, focus instead on perfecting your strongest areas.

Yes, we are talking business now.

Success in business rarely, if ever, flows from natural talent. Instead, success is most often the result of an innate expectation to be our better selves, and to improve something specific. Top performers play to their natural strengths—a logical approach. Top performers are driven to hone their skills constantly, to refine their processes endlessly. To apply massive effort in the development and application of skills.

I learned this, luckily, very early in life.

My experiences in school were perhaps ironic considering how I spend my days today. Grade 11 was on the semester system, giving us two shots at anything we failed the first time around. I had always been a C+ student (C+ students call a C+ “good enough”) without ever cracking a book, but Algebra 11 proved my nemesis. Scoring just 48% (fail) in the first semester, I followed in the second semester with a 49% (another fail) and then—more due to a tolerant summer school professor than my own sudden keen understanding or increased study habits—50%, a pass.

At no point in my schooling would any guidance counsellor have predicted I would one day be involved in the financial services industry in a capacity that includes complex equations. Nor would they have imagined that I would, in my spare time, write blog posts containing a significant number of complex and detailed mathematics accurately worked out on my own.

How did this come to pass?

For lack of a better word, neuroplasticity. (I know this sounds like a one-hundred-dollar word.)

One may not be a “math person,” but they can certainly be a “numbers person.” Regardless of your success or lack thereof in high school mathematics, you can become a numbers person. You might think I am about to reverse course on my “don’t pursue your weaknesses” comments; I am not.

Why are we weak in certain areas? Often due to a simple lack of interest or, more accurately, from a lack of understanding in how this thing will apply ever in our lives. Perhaps you also recall the grade school argument that algebra was “something we would never use,” something for scientists, not for jocks, skateboarders, or rockers. Who needs that stuff! And to some extent I associated any sort of advanced math with people who wanted to split the atom, thus tuning out completely on the topic.

However, the year after graduating from high school I began operating my own business, and as it grew rapidly I quickly came to realize that all basic business, and many of life’s decisions, were in fact powered by algebraic thinking. A light bulb went on.

I can recall sitting at my desk in my small automotive parts and repair shop in 1992 working out a scheme on a significant transaction and realizing that it was in fact a real-life word problem that involved more complex calculation than just “solving for X.” And my interest grew in grasping such calculations for running and growing a business. The part of my brain that had been capable of advanced math all along finally lit up.

Because our brains are not hardwired, contrary to outdated thinking, we can, in fact, learn whatever we want to learn— provided we have enough drive and a genuine interest. It was a revelation and a confidence booster to realize that our brains are capable of taking us much further than most of us will ever go. We are all capable of so much more than we realize.

The critical factor is genuine interest. This is why a triathlon swim is so tough for so many. We can train hard, hire the best coaches, and buy the sleekest suit, but if at our core we hate swimming, hate the water, and hate the process of improving at it then we are limited from the start.

And so as my first business grew I analyzed and broke apart the business process, identifying various pieces that could be done better or more eficiently by others, allowing my time to be focused on what I did best (which was work the telephone) and the business morphed from an in-person local service shop into a mail-order behemoth. It was instantly apparent how much simpler a telephone transaction was as compared to the in-person process.

Focusing on the highest and best use of time is a strength in and of itself.

Invest in others who are better than you are at various tasks.

Build on your strengths and outsource to supplement the weaknesses.

Take some time to speak with people you trust, and to think and journal on identifying your own strengths. And then for a plan to level those strengths up.

I don’t file my own taxes, keep my own books, or try to fix my own teeth. I retain experts for these things.

I also try to avoid cooking, cleaning, and, where I can, driving. These are things I am (mostly) competent at, but the time they consume is better invested in higher-value activities.

The focus of becoming a better me is achieved primarily by building on the strengths I already have. For instance, I enjoy public speaking, and so I take almost every opportunity to speak. But as much as I wish I could play the piano, I know that I will not allocate enough time to it, and so I do not fool myself by registering for lessons when I know I will never practise.

This mindset led me to take my first business from $30,000 gross with one employee (me) to $4,000,000 gross and fourteen employees inside ten years. This growth was fuelled by my continuous hiring of additional people to take on tasks that did not represent the highest and best use of my own time.

In other words, always strive to stay dry and never have to suit up for that swim at all.