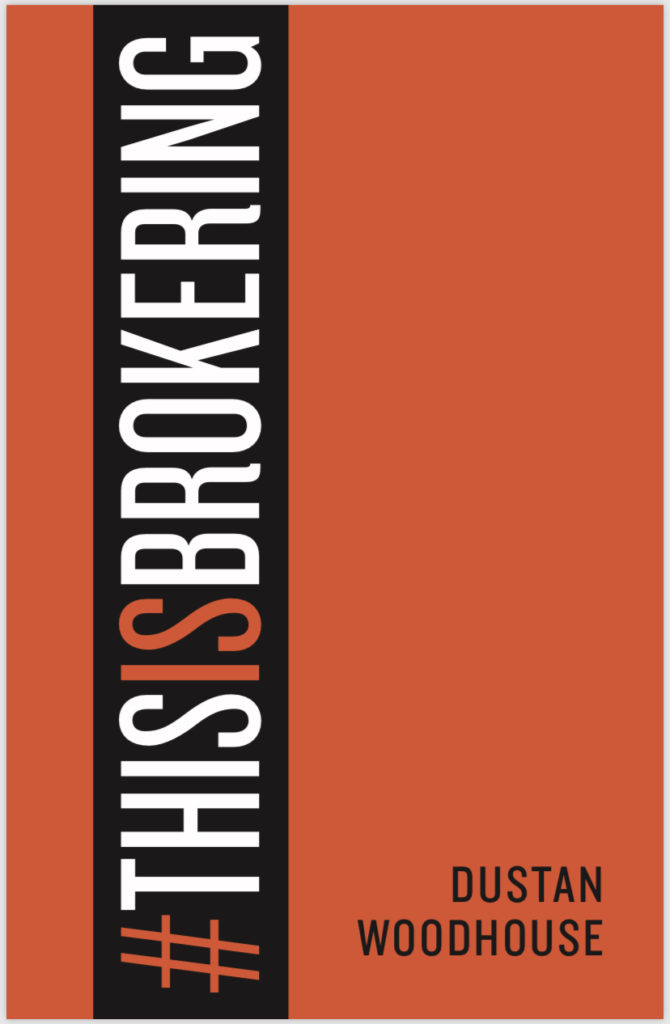 An excerpt from #This Is Brokering – due to be released on Amazon.ca anytime now… anytime…

There are four powerful words to eliminate from your vocabulary. Never forget that we are in the business of building relationships and these four words used on their own, or in various combinations with one another, are easily mixed into a toxic word-cocktail of the relationship-killing kind.

The English language is made up of more than one million words, yet the typical English speaker uses just 4,000 on average. Of the 4,000 we currently use, all that is being suggested is to nix four of them. We’ll still have 3,996 words left to use at our will.

One should never promise anything in business, not ever. All too often the word “yes” is spoken by one party, yet the other hears the word “promise.” When a frustrated client—a rarity in our office—utters the words “but you promised,” I know for certain they are incorrect, for I have eliminated the word promise from my business vocabulary. In fact, I’ve nearly eliminated it completely from my life. Let’s talk business, though.

Business is simply not the most important thing in your life, and you are fooling yourself if you think that it is. Yes you may, as I have done for a few months here and there, wake each morning to a recording of the infamous Glengarry Glen Ross speech by Alec Baldwin. And yes your ring tone, as mine does, may alternate between Shia LaBeouf’s motivational “Just Do It” snippet or a copy of the motivational sales tape from the epic sales film Vacuuming Completely Nude in Paradise. And perhaps you viewed the movie Wall Street less as the cautionary tale that Oliver Stone intended and instead as more of a “how-to-win” guide. This is all well and good, even if a bit over the top, but you would still be wise to eliminate“promise” from your lexicon.

No matter how stone-cold you may think you are as a business person, always ready to deliver the presentation, never missing a scheduled meeting, catching every closing call to be madeall of this can be out the window with a single phone call saying a family member has been rushed to the hospital. Even if you love only yourself, that call from the doc that something is up with you can have the power to derail you at least once in your career. And breaking one single promise can be devastating to said career.

“But you promised…” The words project an emotion-laden guilt that overrides the fact that you may well have had no control over the situation at hand. It could be a personal health scare, an unanticipated market reaction, or a sudden regulatory shift. It matters not why, only that it is possible, and probable, that for one reason or another something in the realm of the client’s expectations will change. It happens. Life happens.

Clients will throw the word promise back at you with the hurt and indignant tone of a petulant child whose trip to Disneyland you’ve just cancelledwhich, in fact, you may be indirectly doing.

The client is not getting their way and they want to assign blame, which is, of course, as natural a human tendency as is the avoidance of blame.

Instead of promise, consider using the word commit or something similar. “Commit” is, for myself, far less laden with emotional baggage. It feels more businesslike to say to a client “I commit to you that I will do all I can to make this happen,” as opposed to a promise statement that will likely be interpreted as “I promise this will happen.” Making a Promisefeels overly personal and is likely to be misunderstood. Whereas Commit still makes a powerful statement, one more easily communicated and more clearly understood.

The word commit is often used in reference to sport, in particular to making a valiant charge for the win. We commit to a challenging line down a mountain, we commit to a radical late-game play, and we all love a player who clearly commits during crunch time. Yet even when that player fails, we don’t fault them for having made the commitment in the first place. Instead we respect them for their efforts.

We all have a hierarchy of commitments in life, and a business commitment is more malleable than a promise.

Remove emotionally charged words from your business vocabulary, the word Promise is all downside with no upside.

If there was ever an emotionally charged word to take us back to base feelings locked deep in our childhood subconscious, liar would be that word. This is a relationship-ending label to assign someone if ever there was one.

Using the word liar is akin to detonating an atom bomb in the relationship, potentially peripheral relationships as well. Few will forget the moment of its use. No apologies, no grand gestures, not even the power of 1,000 “likes” on the victim’s latest social media post will counterbalance the soul-splitting impact of this label. Keep in mind it is a label; in fact, picture yourself with a red-hot branding iron with the word cast into itthat is what you are wielding with this word, as it’s far more than just a simple word.

Few among us would use this toxic word in print or even over the phone, fewer still in person, yet while gossiping among friends it will on occasion arise in description of a third (absent) party. When it does arise, its use paints a rather unflattering portrait of the person speaking. In fact, it may evoke sympathy for the (rightly or wrongly) accused.

Business is all about nurturing relationships. So lock away the weapons of mass destruction and get out the garden tools instead. Take the farmer’s approach with your business. Focus on sustainability. Suffice it to say that keeping clients (and those around them) warm, fed, and happy is a far more profitable long-term plan than going for the jugular.

No farmer mounts the head of his prize bull, jersey cow, rooster, or hen on his wall as a trophy to be admired. Instead they keep them well fed, safe, and healthy, tending to their needs regularly. Even when they disappoint in various ways, even when they do something out of character.

Think like an organic farmer. Build lasting natural relationships. On occasion you may need to tolerate a thick layer of fertilizer to keep things on track, but at least it will be natural fertilizer and not toxic.

The indelible impression you want to be making is of somebody that is tolerant, understanding, gracious, and forgiving.

And avoid this word that shall no longer be spoken.

Assume is a sublime and deadly word. Like slow-acting corrosive acid, the assumption(s) made days, weeks, or even years earlier are eating away at the underpinnings of the elaborate skyscraper of a file you are putting together. And it is often only at the very end of the process that the error of the seemingly minor assumption dissolves the foundation of a massive amount of work.

Who was it that made the assumption(s)? Was it you? Was it the client? Does it even matter?

No, what matters is this: who is considered the professional in the equation? Likely you are (or were). Who was meant to ask every question, cross every t and dot every i? The

professional was. Invariably, these situations boil down to being exclusively your own fault. Of course our intrinsic nature is to paint the picture of this all being the fault of someone else, if for no other reason than to make ourselves feel better.

Snap out of it! It’s not about you, it’s about the client.

Get over yourself. Own the mistake, take the pressure from the client. Get on with finding a solution—a fast and appealing solution. Again, not one that appeals to you primarily, but one that will appeal first and foremost to the client. It’s all about the client! You, your feelings, your needs: these are all secondary at best.

If you find yourself starting a sentence with the words “I assumed,” just stop. Own the fact that to make an assumption is nothing more than to make an “ass” of “u” and “me.” A major mistake in life and in business is to assume anything.

Stop yourself before you attempt to blather your way out of responsibility. Consider the respect we have for one willing to accept blame, 100% of the blame. Accept and embrace the power that is responsibility. And henceforth assume nothing. Ask!

You will be a rarity in owning the error. Especially if it was not really your error to own. Think about it: there are errors lying around left and right in most businesses that nobody wants to take ownership of. They languish unaddressed, with clients being negatively impacted all the while.

Be the rarity, own the error. And you will find yourself a respected rarity.

Never lead with sorry; always think twice before using this word. Is there a better way to proceed? Can you (still) take a different path to render a sorry needless? Can you show that you are sorry with a specific action, rather than weakly using the word alone? Words without action are unimpressive. Actions, as we know, speak volumes.

If we are honest with ourselves—a difficult task for most of us—we usually see the use of the “S” word looming far off in the distance. It’s our lack of action, or specific actions, that have triggered the need to utter this word…and we saw it coming the entire time.

For a pessimist, locked onto negative aspects of everything around them, there often seems no other option than repeating this word or worse still assigning blame to others (shifting blame is not a way to avoid the word, that’s the worst plan). There are people who have set their mental cruise control and climbed into the back seat to have a nap, then, sitting up and looking ahead they stare listlessly at a distant tree, simply awaiting the impact. Why? Because climbing into the front seat, take the controls, and taking responsibility seems like too much work and does not guarantee success anyways. Neither does doing nothing. Make the effort, the extra effort, in advance. Never give up! There is always a way!

One clear reality around having to use the word Sorry is that the use of one, or all, of the first three on the list was probably involved at an earlier stage. In other words, avoid using the first three and by design, you’ll rarely have to use the fourth.

Look past the negative, deal with oncoming threats and problems quickly. Dispatch them as early as possible and move on to better things.

Forethought and action can often negate the need of a “sorry.” Better a small swerve, a skidding stop and perhaps even a reversal than a severe, abrupt, and final stop.

Be forward (thinking). Be thoughtful.
Be aggressive.
Be doing.

And only as a last resort, be sorry.